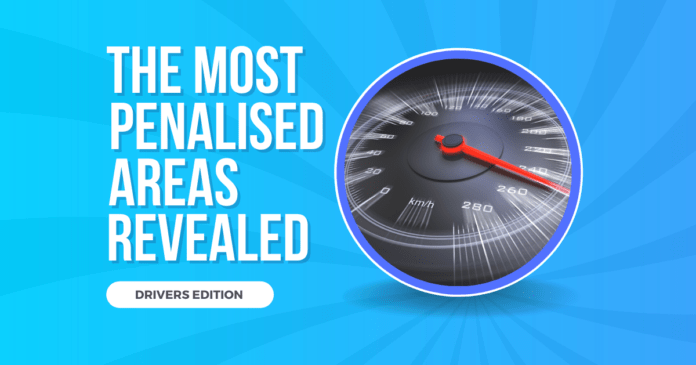 Landing penalty points can leave drivers in a difficult situation, leading to higher car insurance costs and putting them at the risk of losing their licence too.

By analysing recent government data, we have been able to reveal the postcode areas that are home to the most and least penalised drivers in the UK – those that have the highest and lowest percentage of licence holders with penalty points.

We sourced the latest national travel survey statistics on registered driving licence holders per postcode and compared this to the total number of penalty points given to motorists in each postcode, revealing UK hotspots.

Of the ten postcode areas with the highest percentage of licence holders with penalty points, eight are based in West Yorkshire, and two other postcode areas are in Merseyside.

Bradford emerged as the city with the most penalised drivers in the country, with five BD postcodes making up half of the top ten list. But BD3 is the area in the city where the most licence holders have penalty points, with 14.5% having one or more.

However, drivers in L24, south-east of Liverpool city centre, are the most penalised in the country. Around one in seven drivers in the area (15.2%) have at least one penalty point on their licence, which is three times the national average.

The ten postcodes with the highest percentage of licence holders with penalty points are:

Overall, central London emerged as having the lowest percentage of licence holders with penalty points.

Three central London areas made the top ten list of places with the least penalised drivers: EC4V near St Paul’s Cathedral (0.0% have penalty points), EC4A in Holborn (1.8%), and WC2E in Covent Garden (2.0%).

Drivers who want to avoid getting further penalty points on their licence may want to consider moving to a remote Scottish island though, as six of the ten postcode areas with the lowest penalty point to licence holder ratio are based in quiet island locations north of the English border.

The postcodes with the lowest percentage of licence holders with penalty points are:

Factors affecting the number of licence holders with penalty points may be the amount of traffic in each area and the number of permanent speed cameras.

The top ten ‘most penalised’ postcodes have over 60,000 license holders combined and are located in more built-up city areas, while the top ten ‘least penalised’ are more remote, less densely populated areas.

Which areas of the UK have the most provisional driving license holders?

Did you know that it is actually possible to receive penalty points on a provisional licence while behind the wheel as a learner driver? Even so, we were surprised to see that the areas with the ‘worst’ drivers also happen to have high percentages of provisional licence holders.

Two out of every five licence holders in L24 have only a provisional licence (41%). Other areas at the top of the table have similarly high numbers of potential learners. For example, BD3 has 42% and LS9 has 35%.

Birmingham is the ‘Learner Driver Capital’ of the UK

The DVLA data also tells us that an area of Guildford, GU13, boasts a whopping provisional licence rate of 68%. This means that almost seven out of every ten potential road users in GU13 are still waiting to receive their full pink licence. Essentially, less than a third of all licence holders in GU13 (32%) have passed their test.

The centre of Middlesborough, TS1, also featured in the table with over half of their license holders still not having passed their driving test (54%).

These are the top five postcodes with the highest percentages of potential learner drivers:

We also created a tool that enables you to see what proportion of drivers in your postcode area have penalty points on their licence, and how many provisional licence holders (potential learner drivers) there are in the area.

If you are one of the UK’s many provisional license holders, our learner driver insurance will help you get extra driving practice outside of your driving lessons, in your own car, or in a friend or family member’s car, without risking their No Claims Bonus.

We used ‘DVLA driver licence data’ data from this government resource: https://www.gov.uk/government/collections/national-travel-survey-statistics. It was last updated in February 2022.

We filtered out postcodes with less than 150 registered licence holders from our analysis to avoid skewed data.

When is the best time and day of the week to book your driving test?

Learner driver insurance can sometimes seem confusing, but we’re here to tell you it really is quite simple. In this article, we...

When driving safely in foggy weather, the biggest challenge you will face is your vision. Sometimes the fog can be so overwhelming...

How do you drive safely drive in heavy rain?

According to the MET Office, 9 out of 10 weather-related deaths and serious injuries on the roads took place in the rain. Driving...

Which areas of the UK have the most and least penalised...

When is the best time and day of the week to...

ABOUT US
Collingwood Insurance Services (UK) Ltd. is a UK based insurance intermediary with offices in Newcastle upon Tyne. We have been providing our customers value and excellent customer service since 2006.
*TrustPilot review scores correct as of 21.02.22
Contact us: learners@collingwood.co.uk
FOLLOW US
© Collingwood Insurance